Roll over image to zoom in

What Our Customers Say

Post-War Foundation Building by the Development of Original Cameras

By the end of November l946, one year after the resumption of the operations at Precision Optical Industry Co., Ltd., approximately 560 “J II” cameras had been produced. The steady growth of the production resulted from increasing demands for cameras “domestically exported” to the Allied Occupation Forces. In October of the same year, the “S II,” a long-awaited new Canon product, was introduced. It had the viewfinder and coupled rangefinder combined into a single window. This was an original Canon design that was not found in the Leica camera. While the “J II” model was considered to be the legacy of the pre-war “Standard Model”, the “S II” camera was expected to play the role of foundation builder for the post-war Precision Optical Industry.

“II B,” the cornerstone of Precision Optical Industry after the war

Another new mechanism was developed for the “II B,” which was released in April l949. The camera featured a three-mode optical viewfinder. The viewfinder magnification could be changed depending upon the lens in use. This three-mode optical viewfinder was an original Canon design matched to the interchangeable lenses, and this specification was passed on to the future Canon 35mm rangefinder cameras. In other words, the solid foundation for the post-war Precision Optical Industry was established at this stage.

During this period, two major events took place that had affected the destiny of the development of Precision Optical Industry Co., Ltd. One major event was the change of the company’s name to Canon Camera Co. Ltd., and the other was the move of the Head Office Plant to Shimomaruko.

Those days, there were many camera-loving personnel in the Allied Occupation Forces who complained that product branding was very confusing: Canon for cameras, Serenar for lenses, and Precision Optical Industry for the manufacturer of these products. Some of them came to Meguro looking for Canon cameras and found it difficult to remember that the name of the company they were looking for was Precision Optical Industry. Responding to these complaints, and in view of the need to make the company easily recognizable internationally, Mitarai decided to change the company’s name to Canon Camera Co., Ltd. as of September 15, l947. After this change, the names of the manufacturer and the camera were unified under Canon, and the Serenar lens brand was also changed to the Canon in l953.

President Mitarai made a trip to the United States in August l950, three years after the change in the company name, to observe the international trade fair and study the trends in the camera market. He was also looking for the opportunity to establish a sales network in the United States. In order to seek their cooperation in Canon’s sales in the United States, he visited Bell and Howell Company, a well-established company with advanced technology as well as a sales network in the area of 8mm and 16mm cinecameras and projectors. Unfortunately, his request was turned down, in spite of the fact that Bell and Howell recognized the excellent quality of Canon’s high-end 35mm cameras. The major reasons for the rejection were that the Canon cameras were made in Japan and that Canon’s factories were all wooden buildings that could easily catch fire. 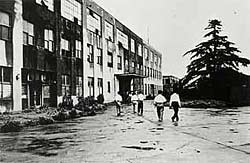 Although his sales plan in the U.S. Market did not materialize, Mitarai’s visit to the United States was not entirely in vain. In fact, Canon benefited greatly not only by the valuable information gathered about the latest status of the world’s camera industry but also by recognizing the need for a new fire-proof factory building with the most modern facilities. In June, the company, looking for new factories, purchased and started remodeling the plant site of the former Fuji Aviation Instruments Co., Ltd., located in Shimomaruko, Ohta Ward in Tokyo. Beginning in November l951, Canon started reorganizing its head office divisions located in Ginza, Meguro factory, and Itabashi factory, and gradually moved their major functions to the new Shimomaruko Head Office Plant.

The new plant in Shimomaruko was very colorful and modern, employing different colors for different workplaces. With the completion of the Shimomaruko Plant, the foundation for a modernized Canon company with the worldwide market in view was established.

Although the Serenar lenses for popular cameras began to appear in the market after the war, the shortage of raw materials brought such strange situations that the first post-war Canon camera, the “J II” was supplied with either the “Serenar 50mm f/3.5″ or “Nikkor 50mm f/3.5″ lens. Finally, in 1947, the development of the “Serenar 50mm f/2″ was completed and used as the standard lens. At the same time, the “Serenar 135mm f/4,” Canon’s first interchangeable lens was introduced.

Confirming that Canon had started the full-scale production of the Serenar lens within the company, Nippon Kogaku stopped supplying the Nikkor lens in 1948. This marked the beginning of the era when Canon’s high-end 35mm cameras were supplied with the company’s own lense.

The “Serenar 50mm f/1.8″, which was introduced in 1951, was developed by Hiroshi Ito, an engineer who later made great contributions to the diversification of Canon’s business. This lens provided an elegant solution to the weakness of the Gaussian lens that often generated flare (coma) at large apertures. Because of his accomplishment, the Serenar lens has been known as a historical masterpiece. Coma was the weakness of the large aperture Gaussian lenses, the solution of which had been a technical challenge to the prominent lens designers throughout the world. The basic optical theory developed by Ito to solve the problem using his own unique analysis expedited the development of the large aperture wide-angle and telephoto interchangeable lenses. As the name of the lens was changed from Serenar to Canon, the company was able to produce many masterpiece lenses based on Ito’s theory.

At the beginning of the 1950s, Canon put many new cameras on the market successively. The “III” camera, Japan’s first model equipped with a fast 1/1000 second shutter speed was released in February 1951. This was followed two months later in April, by the “IV,” which had a flash rail that enabled using a flash unit directly connected to the camera without a cable. Several more cameras including the “III-A,” an improved version of the “III,” were introduced one after another in the new product rush of 1951.

While the development of new products continued, it was inevitable that masterpieces were born, one of which was the “IV Sb.” The “IV Sb,” marketed in December l952 featured the “X” synchronization for electronic flash. The IV Sb was the world’s first 35mm rangefinder camera with electronic flash synchronization. Especially significant was the “IV Sb2,” the improved model of “IV Sb” which was released in March l954. This camera gained an 1/15 second shutter speed by using a slow governor with a dual-escapement mechanism. With the advent of the 1/15 second shutter speed, for the first time the shutter speeds could be a geometric progression of two as the f/stop range of the lenses and exposure meters markings were.
The “IV Sb2″ camera was highly evaluated as being a masterpiece equal to the Leica.