Share
0 comments
We love it when a photo related item makes the news, and this one brings a smile to your face & borrows a page from our point & shoot lesson book! 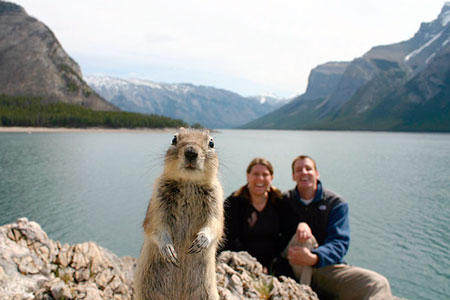 Melissa Brandts and her husband set the timer on their camera for a romantic lakeside snap – only for a Columbian Ground Squirrel to pop-up last minute and steal the show. "It was a once in a lifetime moment - we were laughing about this little guy for days!" The picture was taken at the idyllic Lake Minnewanka in Banff National Park, Canada. Mrs Brandts said: "We had our camera set up on some rocks and were getting ready to take the picture when this curious little ground squirrel appeared, became intrigued with the sound of the focusing camera and popped right into our shot!" Within hours of it's publication, the photo (and it's furry star) became a media and internet sensation, and prompted charges of the photo being doctored or perhaps photoshopped. But National Geographic, who initially published the photo verified that it's real! http://blogs.nationalgeographic.com/blogs/intelligenttravel/2009/08/ground-squirrel-photo-crasher.html Now folks, what can we learn from this photo? Well, it's great that the couple used the camera's self timer mode to take the shot but the photo would've been completely in focus if the couple would have put on the "landscape" mode that almost all point & shoot cameras have...

The landscape mode (the mountain symbol that's also on the dial of most DSLR's) sets the focusing of the camera to infinity so that the squirrel AND the couple would've been in focus! So, the next time you take a photo of any distance shot & you want to be sure that everything's in focus, set the focusing mode to "landscape". You never know when someone (or something) will step in the way!
Share
Previous articleNext article