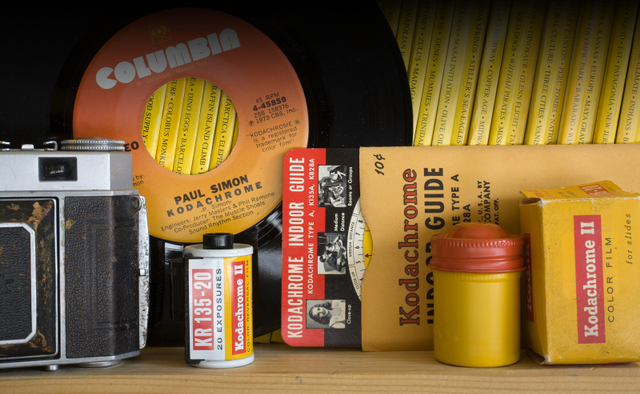 Who of us haven't sung along with Paul Simon's 1973 ode to his favorite film? Especially, it's catchy chorus.... Kodachrome! They give us those nice bright colors They give us the greens of summers Makes you think all the world's a sunny day, Oh yeah I got a Nikon camera I love to take a photograph So mama, don't take my Kodachrome away! Well, it's a sad day for all of us that have shot this film & remember those nice bright colors but here's parts of a press release from Kodak from earlier this morning. (Sniff, Sniff!) "Eastman Kodak Company announced today that it will retire KODACHROME Color Film this year, concluding its 74-year run as a photography icon. Sales of KODACHROME Film, which became the world’s first commercially successful color film in 1935, have declined dramatically in recent years as photographers turned to newer KODAK Films or to the digital imaging technologies that Kodak pioneered. Today, KODACHROME Film represents just a fraction of one percent of Kodak’s total sales of still-picture films. Supplies of Kodachrome are expected to last until early fall. The one remaining film lab that can still process the film, Dwayne’s Photo in Parsons, Kansas, will offer processing until next year". Not only has this film been the choice of many families' slide shows on their Carousel projectors,  it has captured some of the most  iconic images of the last half century. Abraham Zapruder's 8mm movie camera was filled with Kodachrome when he caught the fateful moments that turned out to be John Kennedy's assassination. Steve McCurry's hauntingly beautiful picture of a frightened Afghan girl that apppeared on the cover of National Geographic was also taken with Kodachrome (McCurry has been chosen by Kodak to shoot the last available rolls). To celebrate the film’s storied history, Kodak has created a gallery of iconic images, including the Afghan girl and other McCurry photos, as well as others from professional photographers Eric Meola and Peter Guttman on its website: www.kodak.com/go/kodachrometribute. Does this mean that the death of ALL film is close at hand? Hope not. As long as our customers shoot film, we'll carry it. But this, indeed is a sad day.........
Share
Previous articleNext article